A total of ten festivals for you today as our team behind Clubbing TV gives you the top festivals of the summer season! We have choices and choices for you no matter where you are in the world in no particular order!

A total of ten festivals for you today as our team behind Clubbing TV gives you the top festivals of the summer season! We have choices and choices for you no matter where you are in the world in no particular order!

Kappa Futur Festival in ParcoDora, Turin happening from July 6 to 7 this year is the first one we have in store for you!

FuturFestival started in December 2009 as an aim to celebrate Futurism, gathering 7,000 people from all over the world and then being considered “Italy’s most beloved New Year’s Eve party.” It wasn’t until 2012 that FuturFestival evolved into Kappa Futur Festival, taking its name from a well-known sports brand.

Check out this teaser to get yourself excited for the party! https://www.youtube.com/watch?v=pImhBhZgcwU

Then, let us know if you like day one’s lineup or day two’s lineup more!

Sonar is a household name that prides themselves on bringing music, creativity, and technology to their audience. This three day and two night international festival of advanced music and new media art takes place in various venues. It’s known as a reference of having a balanced mix of cultural offering, playful nature, avant-garde features, and experimentation with electronic dance music’s newest trends.

Although Sonar is based in Barcelona, it’s had flagship events in places like Bogota, Buenos Aires, Hong Kong, Reykjavik, and Istanbul, so it really is known worldwide! What’s special about Sonar is that it has two different sites – Sonar by Day and Sonar by Night. Check this video out now on the first artists the 2019 edition have announced! https://www.youtube.com/watch?v=4nPyiO3IF5s

After you watch that, why don’t you tell us if you prefer Sonar by Day or Sonar by Night?

And what about Dekmantel Festival fro, July 31 to August 4 at Amsterdamse Bos, Amsterdam?

Dekmantel is an Amsterdan-based DJ, events and record company that is all about cutting-edge music, specifically electronic, house, and techno. This is your favorite DJ’s favorite festival because it takes risks instead of playing the hits, building a reputation of championing artistry as one of the most respected festivals in Europe.

To give you a glimpse of this spectacular event, grab a glimpse of Palms Trax’s performance during last year’s edition! https://www.youtube.com/watch?v=fVlVZTHmkaw

Then, let us know who your favorite Dekmantel artist is!

Tomorrowland is all about living today, loving tomorrow, and being united forever. In their words, “We are the people of tomorrow. We believe in enjoying life to the fullest without having to compromise everything. We are responsible for the generation of tomorrow and respect each other and Mother Nature.”

This year, they want you to experience the magic with Unite, bringing flavor with a customized main stage, decoration, and special effects to accompany the lineup of local and international dance music stars.

Check out this video to see how Tomorrowland promotes love and unity! https://www.youtube.com/watch?v=HkyVTxH2fIM

And let us know which of Tomorrowland’s themes you think is the most clever!

We’re stopping at Matterley Bowl next for Boomtown Fair 2019 this August 7!

Boomtown Fair is known as one of the United Kingdom’s largest, independent, and theatrical music festivals with a capacity of 66,000 people. Imagine five days of multiple genres immersing their audiences in a living, breathing, and fictitious city,.

This year, the lineup is made up of over 500 artists across 27 main stages and 80 interactive street venues, so there are all types of sounds curated for your liking!

Each year, Boomtown has evolved as its played out across the 14 uniquely themed districts of the city. It’s a theatrically-led experience where there are also hundred of actors that bring film-like street sets to life! Their purpose is to encourage their audiences to explore the beautiful city of Matterley Bowl themselves to create their own stories!

Here’s a glimpse of A Boomtown Film entitled “What it takes to make a World” that explains all about the story of connection, awareness, and purpose this festival aims to promote! https://www.youtube.com/watch?v=7vGfn9gxbtk

After you watch the video, tell us what kinds of scenes you’re hoping to witness are acted out on the streets of Matterley Bowl during Boomtown!

At Zrce Beach, you can find Sonus Festival this August 18 to 22, a five-day techno party that is more than just a festival.

Sonus was created back in 2013 by organizers Cosmopop, the people behind Time Warp, Love Family Park, and Fade In. Sonus Festival is spread over three different clubs with plenty of preparties, aftershows, and boat parties, promising the most unforgettable time.

Some of the superstars you can catch at Sonus this year include Chris Liebing, Bicep (DJ Set), Amelie Lens, Richie Hawtin, Rodhad, Seth Troxler, Charlotte De Witte, Tale of Us, Solomun, Sven Vath, Ricardo Villalobos, and Len Faki. With good music and white, sand beaches with crystal blue waters at this Croatian festival paradise, you’re bound to have a good time!

Here’s a glimpse of what Sonus Festival was like last year! https://www.youtube.com/watch?v=mwOu8qr2wzg

After you watch that, tell us your favorite beach activity to prep you for beautiful Zrce!

DGTL Barcelona is what we’re talking about specifically because it’s happening from August 23 to 25. This party is happening at Parc Del Forum with four different stages for all three dates. Specifically, the four stages are Modular, Generator, Frequency, and AMP.

This year, DGTL Barcelona is offering something different by allowing their fans to witness a new perspective – handing out a limited amount of “backstage experiences” where partygoers can use the private bar and bathroom. They’re also providing the DGTL hostel, which is near the venue, packed with special activities, and features environmentally-conscious moves in celebrating the event’s 5th anniversary!

Here’s what DGTL Barcelona was like last year! https://www.youtube.com/watch?v=OiNFTyU2CWs

After you watch that, tell us which of the four stages you’re definitely checking out!

Awakenings Festival isn’t something new to you music lovers as well! You know that this is a must-go!

Awakenings is a long-running Dutch festival highlighting the beauty of techno with some of the biggest names in the scene. From old school to new, Berghain torchbearers show that they can perform with their own beats.

Awakenings 2019 is coming up as they’ll be at Recreatiegebied Spaarnwoude from June 29 to June 30. Tickets are already sold out! But, if you’re one of the lucky ones that got your hands on those entry passes, allow me to remind you of the wonderful lineup that’s in store for you!

Among the Awakening names that will be performing this year are William Djoko and Kolsch at the V Area, Claire Morgan and Adriatique at the W Area, Lewski and Amelie Lens at the X Area, Juan Sanchez and Sandrien at the Y Area, Joyhauser and Perc at the Z Area, Browncoat and Paula Temple at the A Area, Ingi Visions and Apollonia at the B Area, and Ion Ludwig and Ricardo Villalobos at the C Area! And that’s just to name a few! Check out the Awakenings website to see their lineups for both dates! https://www.awakeningsfestival.nl/en/line-up/stages/saturday/

Here’s a little bit of a throwback to the 2016 aftermovie! https://www.youtube.com/watch?v=K8B5ZnPqk5k

Let us know what you love most about the Awakenings sound!

Family Piknik Festival is located in Montpellier, the south of France that’s 2 hours away from Lyon and two and a half hours away from Barcelona. Family Piknik was launched in 2012 and has gotten their eclectic audience to grow bigger and bigger throughout the years. This festival created by Christophe Gimenez, also known as Tom Pooks, is aimed to build a family-friendly atmosphere for families with the best of underground music from the daytime to the night. Of course, there is good food as well available on-site like pizzas, food trucks, and sandwiches. Plus, children will get to enjoy the free games and animations!

If you still need a clearer picture of what Family Piknik Festival is like, here’s the 2018 aftermovie! https://www.youtube.com/watch?v=MusZ8DYsEYA

Tell us what you love about a great family-friendly event!

This is one of the world’s biggest dance music festivals, promising not to let you down during the August Bank Holiday from the 22nd till the 25th of the month!

This year, Creamfields wants to build the “Creamfields Community” to establish themselves as one of the safest festivals in the world, saying, “we want you guys to have the time of your life but we also want you to do it safely.” In their words, “As many of you who have already attended the festival will know, Creamfields has a zero tolerance to drugs, and stringent security measures are in place. These procedures are developed and improved year on year and we ask festival goers to remember that the security and Police we have on site are ultimately there to keep you safe – so we urge anyone attending to not bring drugs into the show and to not use drugs whilst at the show.”

In order to make sure that their festival is completely drug free, Creamfields is implements welfare tents, neighbourhood watch, a campsite village – chill out area, and hubs. They also urge their guests to help think of ways to reduce crime at the events!

Of course, despite staying safe, Creamfields still knows how to have fun! Here’s their 2018 aftermovie! https://www.creamfields.com/aftermovie2018

After you watch that, why don’t you let us know why you think other festivals should advocate for safety as well!

And that concludes Clubbing TV’s picks for the top ten music festivals of the season. We hope you got a knack out of that, encouraging you to travel the world in the coming months because there is so much music to enjoy! 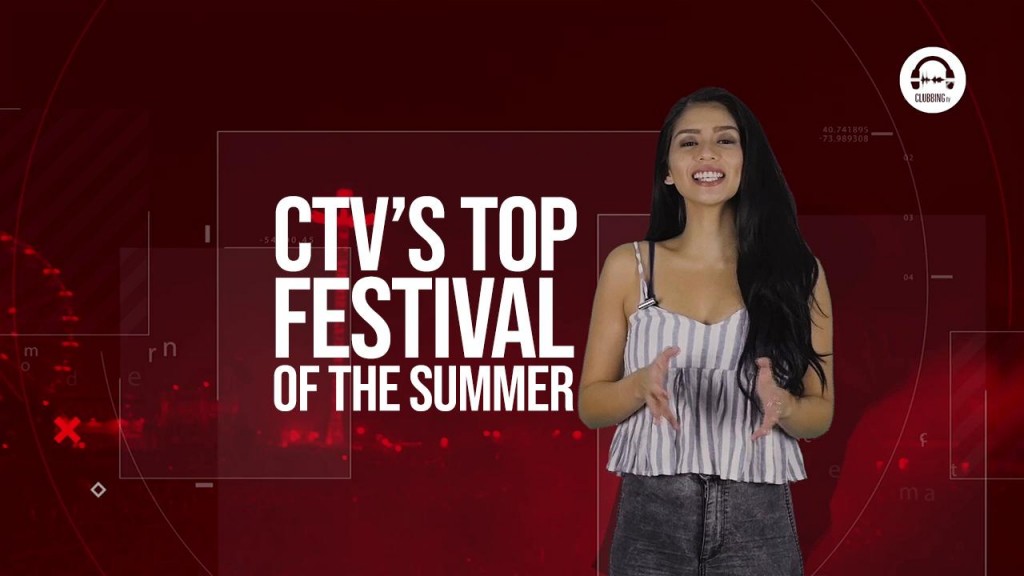